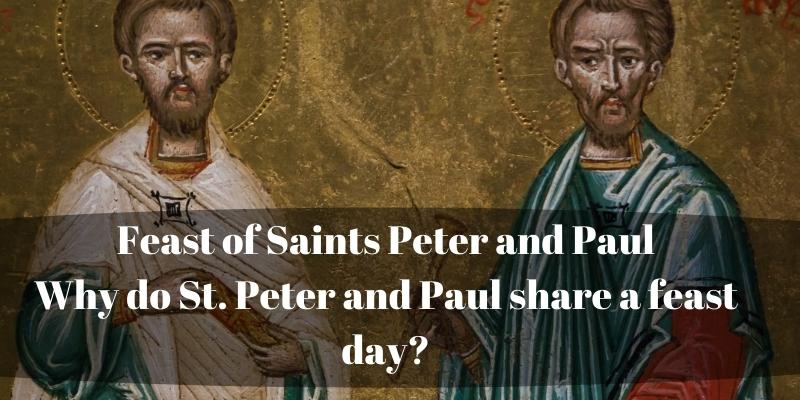 The feast of Saints Peter and Paul is identified in the person of Apostle Peter. Before the apostleship was called, Simon was of Jewish descent from the borders of Galilee in Palestine. From a small and unhallowed city called Bethsaida. He was the son of Jonah, of the tribe of Simeon, and a brother of St. Andrew the Apostle, the first called. And also in the origins of Paul.

Saints Peter and Paul are celebrated on 29 June after fasting, which varies in length depending on the date of Easter. They are the protectors of those deprived of their freedom because those in prisons are people who have wronged God. As they have wronged themselves: Peter denied Christ, and Paul persecuted the Christians. The 29th of June, the feast day of Saints Peter and Paul. Marks the middle of the rural summer and the harvest period. The two apostles are celebrated together because they died on the same day. In 67, during the Christian persecution by the Roman Emperor Nero. In popular belief, when St Peter’s day rings. No peanuts and walnuts will be made that year, as worms and fall eat them.

Saint Paul, who before his apostleship was called Saul, was a Jew of the tribe of Benjamin. He was born in Tarsus Cilicia to honest parents who had previously spent time in Rome. He then moved to Tarsus Cilicia with the honorable title of a Roman citizen, for which Paul afterward called himself Roman.

What happened to St Peter and St Paul?

Saint Peter also became the disciple of the Saviour after witnessing a miracle: one morning, Christ spoke to the crowd on the shore of Lake Ghenizaret. He climbed into Simon Peter’s boat and asked him to take it a little further from the beach to be better heard. Indeed, when he had finished speaking, he told Simon to go fishing.

According to tradition, Peter and Paul were martyred and imprisoned in the same cell in the Mamertine prison in Rome, where they converted their jailors and prayed until a spring appeared in the middle of the cell that can still be seen today. Another common virtue of the two Holy Apostles is their faithful love for Christ and the Church: They loved Christ unto death. They fought for the unity of the Church, for her truth, enduring a great deal of suffering, persecution, imprisonment, famine, and many kinds of persecution.

In the same way, the Apostle Paul, the persecutor of the Christians, receives the mission to go to Damascus to arrest those who believe in Christ and bring them in chains to be judged. Before entering Damascus, a powerful light overwhelmed and blinded him and told him: Saul, Saul, why do you persecute me? But who are you? I am indeed Jesus whom you are persecuting. And also, what must I do? Therefore, go to Damascus to the house of Ananias, and there you will be told what to do. He was taken to Damascus by Ananias, who took him into his home, fed him, and preached the Gospel to him.

Read also: Why is Abraham important to Christianity? What did Abraham do in The Bible?

Biography of Peter and Paul

Why are Peter and Paul celebrated together?

The most influential preachers of the Christian faith, Saints Peter and Paul, are celebrated on 29 June. Many traditions and customs are preserved around the feast, passed down from generation to generation. Saint Peter, son of Jonah and brother of the Apostle Andrew, was also born in Bethsaida of Galilee. His Jewish name was Simon, but the Saviour would call him Chifa (stone). After a beautiful fish catch on Lake Ghenizareth, he is called to become a fisher of men.

Together. Peter and Paul are celebrated for having witnessed together the deity of Christ. Peter, when asked by the Saviour, “But who do you say that I am?” indeed, in the name of all the apostles, answered, “You are indeed Christ, the Son of the living God” (Matthew 16:16). So, the Apostle Paul says in the Epistle to the Colossians, chapter 2, verse 9: “For in him dwells all the fullness of the Godhead in Christ.”

Peter testifies in the name of the apostle to the deity of Christ but also breaks away from Christ when he is caught to be crucified. After the Lord’s Ascension, Peter speaks to the assembly of disciples and chooses Matthias as the apostle instead of Judas. So, on the day of Pentecost, three thousand people are baptized after the sermon of the Apostle Peter.

How were Peter and Paul considered?

A native of Bethsaida Galilee, Saint Peter was the brother of Saint Andrew and a fisherman like all his family. When Christ urged him to follow him, he gave up his trade and dedicated himself to preaching the Gospel. His Jewish name was Simon, which Jesus changed to Chef or Peter, meaning stone, alluding to his strong faith.

As a result of biblical accounts and historical bishops, Peter and Paul are considered the disciples of Jesus who contributed most to the spread of Christianity in the world. Saints Peter and Paul are particularly honored by the Church as they are the only saints whose feast is preceded by fasting for Orthodox and Greek Catholics.

Saint Paul was born around the year seven into a Jewish family from Tarsus Cilicia. His name at birth was Saul. He came to learn under the guidance of Rabbi Gamaliel. However, Paul did not know Christ, while the latter took earthly form. Instead, he witnessed the martyrdom of St Stephen.

“But when Peter came to Antioch, I had to oppose him to his face, for what he did was very wrong. Thus he first arrived, he ate with the Gentile believers, who were not circumcised. But afterward, when some friends of James came, Peter, indeed, wouldn’t eat with the Gentiles anymore. He was afraid of criticism from these people who insisted on the necessity of circumcision. As a result, other Jewish believers followed Peter’s hypocrisy, and Barnabas was led astray by their hypocrisy.” What is the Feast of Saints Peter and Paul called?

It is said that on the day of Saints Peter and Paul, nightingales and cuckoos stop singing. And turn into hawks, returning to their original form on Annunciation Day. And also, women would not be allowed to eat apples until this day to be healthy.

Indeed, this day of The Feast of Saints Peter and Paul is called Midsummer Saint Peter’s Day. It brings with it several customs, traditions, and superstitions. In addition, in folklore, the day of 29 June, which celebrates Saints Peter and Paul, marks the middle of the rural summer and harvest time.

Equally, Peter is the patron saint of agriculture and is responsible for the state of the crops. He is the patron of heat and rain and punishes those who disobey him with thunder and hail. It is said that when St Peter cracks his whip. Also, sparks fly from it and turn into fireflies when they fall to the ground.

What is the Feast of Saint Peter and Paul?

Similarly, the 4th century Apostolic Constitutions testify to the antiquity of this fast. Later testimonies are found in St. Athanasius the Great, in Theodoret, Bishop of Cyrene. And in Leo the Great, who calls this fast the Summer or Pentecost Fast. In the beginning, this fast was kept only in monastic circles. And only later was it extended to the faithful throughout the world.

The Lent of the Holy Apostles, which precedes the typical feast of Saints Peter and Paul (29 June), is established by the Church in honor of the two apostles and memory of their custom of fasting before undertaking more important acts (see Acts 13:2 and 14:23). In keeping this fast, the gifts of the Holy Spirit, who descended upon the Holy Apostles at Pentecost, are also celebrated; this is why, in ancient times, this fast was called the Lent of Pentecost.

A simple and practical rule for determining the length of the Lent of Saints Peter and Paul in any given year is the following. The more days there are from the date of the Resurrection (inclusive) of that year to May 3. The more days the fast lasts, for example, in 1982. When the Resurrection was celebrated on 18 April, the Lent of the Holy Apostles was 15 days (14-28 June).

As a result, according to popular tradition, Saints Peter and Paul sit on the Moon: the first on the right, the second on the left. Saint Peter is the one who has the keys to the gate. And the rooms of Heaven and is also the right hand of God.

Who was saint Matthew? Details about his journey