The Feast of the Baptism of the Lord teaches us uniquely that the incarnated Son of God. Jesus Christ is one of the Trinity. When the angel told her how to have a child, the Virgin knew the secret for the first time, even though she had never known a man, namely: “The Holy Spirit will come to you, and the power of the Almighty will fill you; so from the Holy One who was born of you, to be called the Son of God” (Luke 1:35). So we see that the whole Holy Trinity contributed to the incarnation or birth of the Son. However, only the Son became man.
The feast of the Baptism of the Lord, also known as the Epiphany, is one of the most significant feasts in Christianity. It has a special meaning for the Christian life because no one can become a Christian without baptism.

Christ did not need to be baptized by John because He was sinless, but since He assumed the state of humanity. That is, into a world marked by sin and death. He baptized the redemption of mankind. He was showing everyone that They needed purification and change. This change or renewal means that the sinful and disobedient older man must die so the new man can be born. And live forever in obedience and love in communion with the Father, Son, and Holy Spirit.

What does Jesus say to John when he baptizes Him?

When the Saviour Jesus Christ was baptized in the Jordan by John the Baptist and Baptizer, St. John felt His holiness and said to Him, “I need to be baptized by You, and You come to me?” (Matthew 3, 14), because he was born naturally and carried in his nature the ancestral sin. Still, the Saviour was born without sin, that is, above heart, of the Holy Spirit and the Virgin Mary.

According to the biblical accounts, during His baptism, the Saviour replied to John: “Let us now, for thus it is fitting for us to fulfill all righteousness” (Matthew 3:15). In other words, it is not necessary for Jesus Christ to be baptized, because He is sinless, but because He freely takes upon Himself the sin of the world, He fulfills righteousness, that is, the will of God the Father that His Son should be the Savior of the world. He made Himself the bearer of the human condition, of life mingled with death, to give mortal men His life without eternal death.

What is the Great Sanctification of Waters?

The Great Sanctification of Water, or the Great Aghiasma, celebrated only on the feast of the Baptism of the Lord, is one of the most beautiful services of Orthodoxy. It is celebrated outside the church because the Saviour Jesus Christ was baptized not in a closed space but in the Jordan River. Usually, this service is celebrated near a clean river or spring, and if it cannot be done there, it is celebrated near the church, where many water vessels are prepared with great care and piety for this holy moment.

The Great Water Sanctification has many parts, and its content first highlights God’s love for mankind, a love shown in the Incarnation of our Saviour Jesus Christ and His Baptism in the Jordan. Therefore, the prayers and songs of this day link the Nativity of the Lord and the Feast of the Baptism of the Lord, but also the Baptism of the Saviour and the salvation of men, of those who with faith and joy received Baptism in the name of the Father and of the Son and the Holy Spirit.

The Baptism of the Lord in iconography

The icon of the feast of the Baptism of the Lord aims to highlight the divine humanity of Christ, the revelation of the Holy Trinity, and the restored creation.

In Christian iconography of the Lord’s Baptism, Christ is sometimes depicted standing on two stone slabs forming a cross with a serpent raising his head below. This detail is inspired by Psalm 73, verse 14: “You crushed the head of the serpent in the water.” The dragon symbolizes the devil and his angels. At the Savior’s feet, two figures are often depicted in the icon’s lower part.

So, John the Baptist stood on the bank of the Jordan on the right side of Christ, one foot behind the other. With a trembling expression, he stretched out his right hand and touched the head of Christ. In some icons, the Redeemer is shown approaching John the Baptist, bowing his head under his hands. This is to show that the sinless Lord does not need baptism. He was baptized willingly and humbly for our redemption.

Key Verse related to the Baptism of Jesus Christ

“…and this water symbolizes baptism that now saves you also—not the removal of dirt from the body but the pledge of a clear conscience toward God. It saves you by the resurrection of Jesus Christ.” 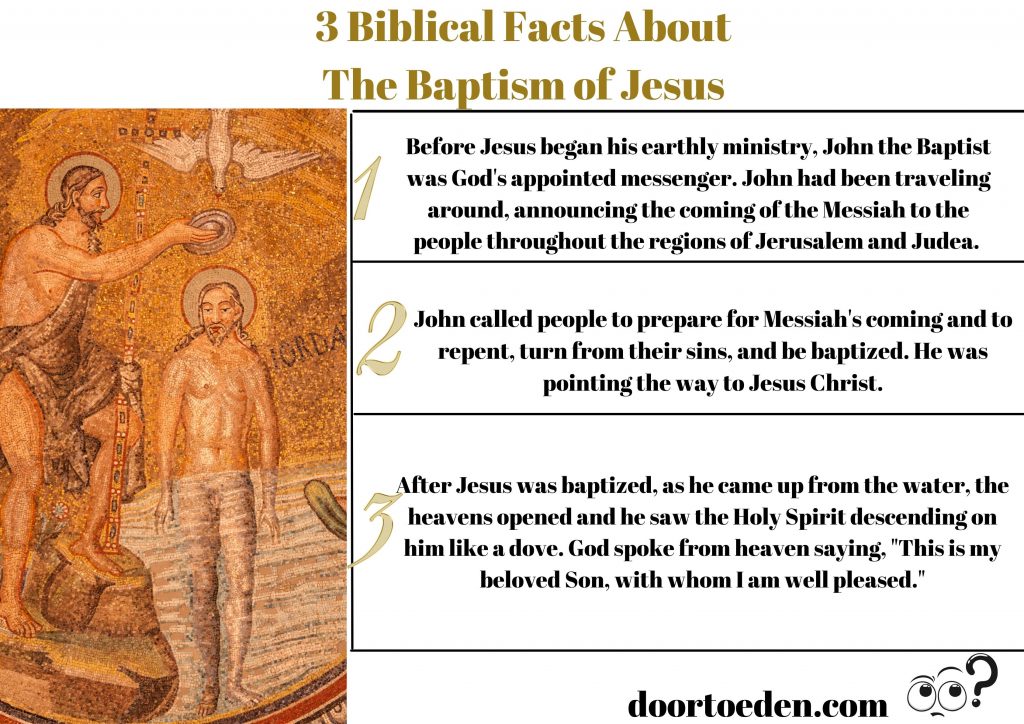 The signification of the baptism of Jesus

Born of the Blessed Virgin Mary in a humble cave after His discreet entrance into the world, He is now confessed and revealed to all as the Son of God. A distinction must be made between the iconic message of the Baptism scene, which visually and chronologically compresses imagery of overlapping meanings, and the significance of Theophany as an act and event in itself, with all its consequences in the economy of salvation.

The sign of Christ’s baptism is that He baptized Himself so that the older man of sin might die and the new man, in His image, might be born. As the Father said at the Baptism of the Son who became Man: “This is my beloved Son,” He also says mysteriously when each man is baptized, revealing His unfailing love for our salvation.

The appearance of the Holy Spirit as a dove resting in the Son reveals that Christ bears the seal of the Spirit’s presence, the manifestation of God and the One who makes it possible, the subject and the object of the divine image. So Christ is born through the work of the Spirit, is the bearer of the Spirit, and works through the Spirit himself. Christ came into the world so that the Spirit could be fully manifested.

Read also: The true meaning of the TAU cross.

Since when was Epiphany celebrated?

One of the oldest festivals in our church is Baptism (“Epiphany”), also known as the “Feast of Lights.” We don’t know when this great holiday came into being, but in any case, it happened after Easter, the most important Christian holiday, celebrated on January 6 by all Christians.

Epiphany has been celebrated since the earliest Christian times. However, in some Christian centers, other festivals are added to the baptism of the Lord. At the end of the 3rd century AD, Epiphany and the Birth of the Lord in Jerusalem was celebrated on the same day as Epiphany, the Shepherd’s Epiphany, and the Epiphany, January 6. In the church of ancient Egypt, it was honored with the birth of Christ and his baptism. Additionally to the two festivals mentioned in Cyprus, the miracle of Cana in Galilee, when Jesus turned water into wine, is also celebrated together.

In the Old and New Testaments, water is an element of the regeneration of creation, and through his Baptism, Jesus sanctified the nature of water. The Epiphany manifests the three aspects of the Trinity: the Son is baptized in the Jordan by John, the Holy Spirit descends upon Jesus in the form of a dove, and the Father in heaven declares him to be his Son.

Why is the Feast of the Baptism of the Lord also called Epiphany?

Catholics celebrate Epiphany on 6 January, symbolizing the announcement of Christ’s birth to the Magi, who brought him gifts of gold, myrrh, and frankincense, while the Orthodox celebrate the baptism of the Saviour in the waters of the Jordan by St John the Baptist.

The Feast of the Baptism of the Lord is called Epiphany because during the Baptism of Christ, as the Evangelists tell us, the Holy Trinity was revealed. That is, when Cized in the Jordan River by John the Forerunner, the voice of the Heavenly Father was heard, who said: This is my beloved Son.

For this reason, Christ the Lord waited for baptism until this age so that He might fulfill the law with all ages, sanctify our flesh, and give us power so that we might overcome our passions and be free from deadly sins.

Why do people consider Epiphany an extraordinary special power?

So in Epiphany, all the waters are consecrated, and the priest goes to water into which he throws across. Therefore several men throw themselves into the water to bring it back, and whoever pulls the cross out of the water will have good luck all year.

Believers and priests believe that the water of Epiphany (The Feast of the baptism of than extraordinary is a special power because it was sanctified by a double call of the Holy Spirit. And the sanctification takes place on the very day the Savior was baptized in the waters of the Jordan. Water consecrated in church on accepted and taken by the faithful never spoils. Holy water is meant both sacred water and the service for its consecration.

Some faithful pilgrims say that the waters of the Jordan flow backward for a few moments Jordan flows backward. It is cold outside in January; many faithful enter the Jordan River in their long white shirts, which they then carefully store for wearing on the day of burial.

Read also: Nativity Scenes Around the World: The Symbol of The Catholics.

The Bible mentions John the Baptist, the forerunner of Jesus Christ, who preached His coming, calling the Jews to repentance. The people of Jerusalem and the whole of Judea,  to be a prophet, gathered around him to listen to his words and, above all, to be baptized by him in the Jordan River.

Have a good day, and take care of your heart! May the Feast of the Lord’s Baptism bring you the most peaceful and wonderful mood you can experience!

What Is the Meaning of Mammona? | A powerful demon