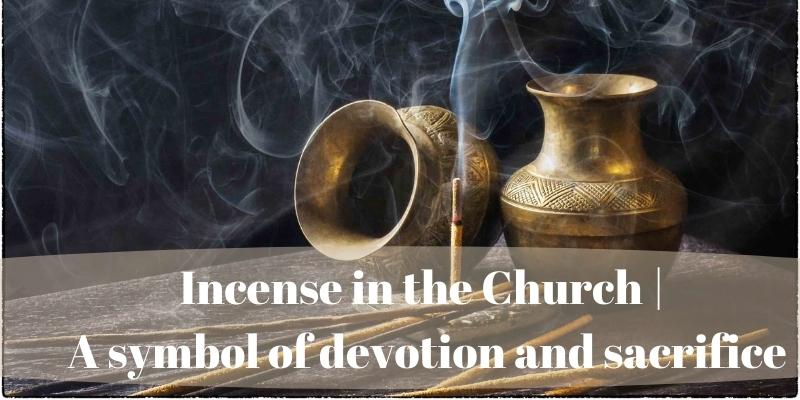 The use of incense in the church is represented by an ancient cult that continues to repeat itself today during a liturgical function. Specifically, during Sunday mass, liturgical events on the occasion of Holy Christmas, the death, and the Resurrection of our Lord. And other religious functions, the priest burns incense in the Church through the use of the thurible. A metal container is suspended and closed with a cover.

What is incense, and how has man used it in history

Incense in the Church is a resin secreted by a family of plants typical of the Arabian Peninsula, East Africa, and India: the Boswellia. It is a family of shrubs that exude a resin – rubber resin, to be precise. Which, when dried, is left to crystallize and burn. It gives off intense aromas and has different properties, such as antiseptic ones.

We are sure of the existence of incense in ancient times, as it is mentioned in sacred and historical texts. There is talk of smell in the Old Testament, the Mahabarata, the papyri of ancient Egypt, and the Jewish Torah.

In ancient times, incense in the Church was often used in the sacral and liturgical sphere, sanctioning the decline and rise of peoples and communities as one of the most traded goods in human history.

Thanks to the choice of resin grains obtained from shrubs of tropical and oriental countries. During the liturgical function, when the incense in the Church burns, it is possible to notice that unmistakable aroma. And those clouds of white smoke that accompany the swing of the censer. A source of inspiration. On a spiritual level.

Incense is one of the many signs the liturgy uses to express messages and feelings. And spiritual attitudes. These signs are many: sacred images, vestments with their colors, and body attitudes. (Standing, kneeling, prostrations …) light (candles, paschal candles), anointing oil (chrism, oil for the sick, catechumens), water. Ashes, the sign of the cross and peace, etc. The list is long but very interesting to penetrate the profound meaning of the liturgy, which speaks through gestures-signs-symbols.

Incense in the Church is certainly not one of the most important signs of the liturgy. However, it has its history and its meaning. It symbolizes prayer and reverence towards God; honor is given to the person considered necessary. In an atmosphere made pleasant by the scent of him.

Representation of Incense in the Church Use of incense in liturgical functions: a historical tradition symbol of sacrifice and prayer.

The use of incense in Church rites dates back to 2000 BC, years preceding the birth of Christianity. And marked a turning point in both the new and the old Testament, symbolizing sacrifice and prayer.

In addition to having a solid spiritual value at that time, the commercialization of incense also represented a crucial economic source in the relationship between eastern and western countries as the caravans. Departing from the East, they ended their journey in Israel, finally entering the Roman Empire.

The use of incense in the Church is a sign of adoration toward God.

In particular, incense in the Church symbolizes adoration, prayer; divine grace poured out on believers, respect, and devotion. During a religious service, the fragrance of smell is crucial to remember to pray, bless God and ask forgiveness for sins committed. The smoke of the incense symbolizes the mystery of God himself, and, with its elevation, through the fragrance and the image of the black cloud, a unique bond is created between the earth and the sky, expressing all the sweetness of God’s presence. The smoke and fragrance of the incense generated by the oscillation of the censer remind us how much the prayer to our divine Lord Jesus Christ is pleasing.

The use of incense in the Church to honor God

The Church incenses the faithful, bodies of the dead, priests, bishops, archbishops, and priests. And other servants of God to pay homage to our divine Lord in their person. And to implore Jesus to offer eternal holy rest to the soul of the dead. During this rite, the priest swings the censer three times to indicate the person of the Father, the Son. And also, the Holy Spirit symbolizes the Holy Trinity without dividing the divine substance.

Finally, incense in the Church recalls the attitude of offering and sacrifice of the believer towards God. To be accurate and not an empty ceremony as the prophets often complain in the Old Testament, this symbolic act, the Old Testament, must be a sign of a true inner spirit that offers itself. As “a perfume of sweet odor, a sacrifice accepted and pleasing to God” (Phil 4:18) to be able to walk “in charity. In the way that Christ also loved you and gave himself for us. Offering himself to God in the sacrifice of sweet smell “(Eph. 5,2).

Medical use of incense

According to magickal spot, as we have seen, in addition to the religious significance, incense in the Christian Church was used for its antiseptic properties. Therefore, in Arab countries, on the other hand, incense was used for fumigation and inhalation to dissolve the mucus in the respiratory system and as an expectorant.

In Ayurvedic medicine, the substances contained in incense help to rebalance the Pitta (Fire) dosha excess. It has refreshing and nourishing properties for the body’s tendons, ligaments, and joints. Also, for the Pitta dosha, incense is used to restore the correct functioning of the intestinal mucosa.

The habit of making the sign of the Cross during the incensation rite is not a prescription of the Church. But a gesture deriving from an excessively symbolic vision of the oblation to God, while the most suitable sign is represented by bowing to the will of the Lord.

Even today, incense in the Church maintains the same meanings: a sign of veneration and prayer, and honor to people. And also things at the moment of the celebration. In the Holy Mass, it is used during the entrance procession to incense the altar at the beginning and the offertory at the proclamation of the Gospel. (Veneration towards the Master) at the elevation of the Consecrated Species (adoration to the present Lord). And express love and prayer.

The celebrant is incensed as a representative of Christ and the whole assembly as a participant in the royal and prophetic priesthood of Christ. In the consecration of the altar, the incense is burned on the altar itself. An apparent reference to the Old Testament that wants to unite the altar and the table in a single reality.

Three Kings Day. When Is Three Kings’ Day and How Is It Celebrated?