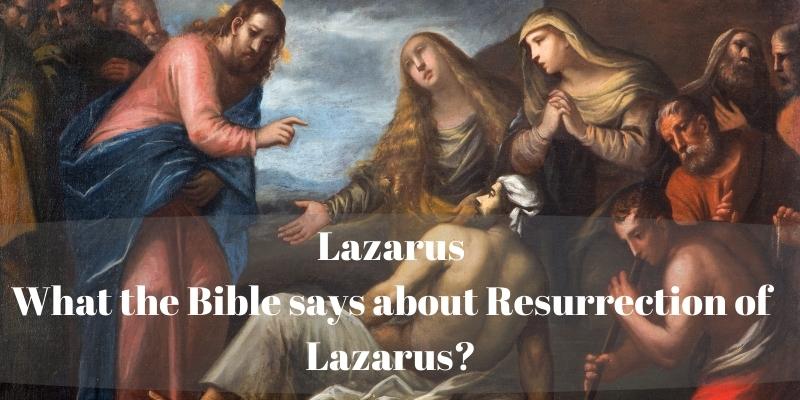 In the days leading up to His Passion, Christ was in a desert land beyond the Jordan, in Perea. Here he will receive the news that Lazarus is seriously ill and that he is expected to heal him. The Gospels do not mention his illness, but it was undoubtedly an illness without a cure. Christ does not go to Lazarus until two days after hearing this news. Yet, He also arrives in Bethany with his disciples on the fourth day after Lazarus’ death.

Lazarus is first presented in the gospels as “a commoner” (John 11:1). Among his contemporaries, he was relatively anonymous in Bethany, living his life in the shadow of Jerusalem. His resurrection, however, made him one of the best-known figures of the time, the talk of the town. Lazarus is still talked about to this day. The resurrection of Lazarus is celebrated in the Church the day before Easter. From the Gospels, we learn that Lazarus was the brother of Martha and Mary and lived in Bethany. This town is located in the Holy Land. And is situated on one of the rocky hills southeasts of Mount Olives.

Upon entering the village, he is greeted by Martha with the following words: “Lord, if you also had been here. My brother would not have died”. Christ replies, “I am the resurrection and the life,” that is to say. He is the One who brought all things into being. And the One who has the power to conquer death.

Who are Lazarus in the Bible and the rich man?

So in the parable of the unmerciful rich man and poor Lazarus. Jesus compares the lives of two people – one rich and one impoverished. Therefore, in the absence of welfare, state hospitals, and soup kitchens, it was typical for the needy, infirm, and disadvantaged to beg outside the homes of the rich.

The Lazarus of the Bible was indeed a poor man, and the rich man was a man whose parable was given by God. It was also expected that the rich would be generous. And give a little of their wealth to comfort the suffering. But in this parable, the rich man was “selfishly indifferent to the needs of his suffering brother. In life, their situation remained unchanged, but after death, judged by God, their positions were reversed.

There is no evidence in any of the accounts. The rich man became rich by unrighteous deeds; perhaps they both made efforts and managed their wealth wisely. And were blessed by God. But it seems that something was wrong with their attitude to life. God, money and fellow human beings had a high eternal cost.

What happened to Lazarus?

After the murder of Archdeacon Stefan, Lazar and his sisters went to the island of Cyprus. He was also wanted for murder. When Paul and Barnabas landed in Cyprus on their first missionary journey, they met him there and ordained him bishop of Cyprus. Tradition says that after being resurrected by Christ, he lived another 30 years and then died.

According to the Bible, Lazarus fell ill and died but was resurrected because he was a friend of Christ. So no one should lose hope, even highly evil. In what happened to Lazarus, through the deliverance, we learn what is accomplished with each of us when we are delivered from the death of the soul. Through repentance, man becomes alive. But this is not enough; it is also necessary for the priest to give the unbinding, just as Lazarus needed to be undone by the Apostles at the command of the Saviour.

He was buried in Larnaca in, Cyprus. A small church was built over his tomb. Around 890, Emperor Leo the Wise moved the relics to Constantinople. In exchange for the holy relics, he offered money and craftsmen who built the church of “Saint Lazarus” in Larnaca, which can still be seen today.

Did Jesus weep at the tomb of Lazarus?

When he calls Lazarus from the tomb, Christ’s cry is seen as an image of the call from the earth of all the dead to the resurrection of the dead, which will be a call to all at the final judgment. Such a word or such a power must have been used by God the Word at the world’s creation.

According to the Gospels, Christ will weep at the tomb of Lazarus. He will cry out of pity for all human nature, not only for Lazarus but all human nature that has fallen into decay. Jesus will ask for the stone to be removed from the tomb’s door, he will thank the Father for the miracle that was to happen, and then he will call Lazarus out. Christ comes out of the tomb as he had been buried: wrapped in a shroud with a mahram on his face.

Then he created them all one by one, while at the resurrection, he will call the bodies of all at once to a new life. In the case of Lazarus, the victory over death was not final because there was a resurrection of his earthly body in him. Only in Christ will death be thoroughly defeated.

“Now a man indeed, named Lazarus, was sick. He was from Bethany, Mary’s village, and her sister Martha.(This Mary, whose brother Lazarus indeed now lay sick, was also the same one who poured perfume on the Lord and wiped his feet with her hair.).” How is Lazarus of Bethany described?

Lazarus was Martha and Mary’s brother, who lived in Bethany, near Jerusalem. He indeed is the one whom Jesus Christ raised from the dead after four days, saying the words, “I am the resurrection and the life; he who believes in me, though he dies, yet shall he live” (John 11:25). Then he called him out of the tomb in which he was laid.

Church tradition says that Lazarus of Bethany was an earnest man. A man who did not smile for 30 years after the Lord’s Resurrection. Until the end of his life. One exception is mentioned: Lazarus saw a man stealing a clay pot at one point. And exclaimed with a laugh, “the clay steals clay.”

Lazarus’ name also appears in the tradition of the foundation of the Holy Mount Athos. It is said that the Mother of God, together with Saint John the Apostle, traveled to the island of Cyprus to see Lazarus. Only a storm brought the ship near Mount Athos, where people worshipped the gods.

What is Lazarus Saturday?

Lazarus was sick, so the sisters sent for Jesus to come to their house and heal him. But he died before Jesus came, and so the great miracle of the resurrection of Lazarus takes place, though dead for four days. And laid in the tomb, is brought back to life by the Savior. Then many of the Jews who were there believed in him.

Lazarus is the Saturday before Palm Sunday – the Lord’s entry into Jerusalem. On this day, the Church commemorates the resurrection of Lazarus by Jesus Christ in Bethany. The date of this feast day changes from year to year, depending on the date of Easter – eight days before Easter.

The Evangelist John tells us that on the eve of his entry into Jerusalem. A few days before his Passion, the Saviour Jesus Christ came to Bethany, having been called by the sisters of Lazarus (a friend of Jesus). Martha and Mary, in whose house Jesus had stayed several times during his public activity.

Indeed, Lazarus was a Jew living near Jerusalem and could have been influenced by the prejudices of his countrymen about Christ. But he also decided to offer him his friendship. Lazarus of Bethany was one of Christ’s most steadfast disciples. From their first meeting, his faith in Christ had been strong. His love for Him was deep, and he was very fond of the Savior.

The Gospel doesn’t give us much information about this man’s character. Still, it does give us one detail that speaks volumes – Jesus called him a friend: ‘Lazarus our friend’ (John 11:11). He is indeed the only one outside the circle of the twelve disciples who the Gospels say was their friend. When they called Jesus to heal him, Lazarus’ sisters called Jesus to heal him and knew this: “He whom you love”; more precisely, who is your friend (John 11:3).