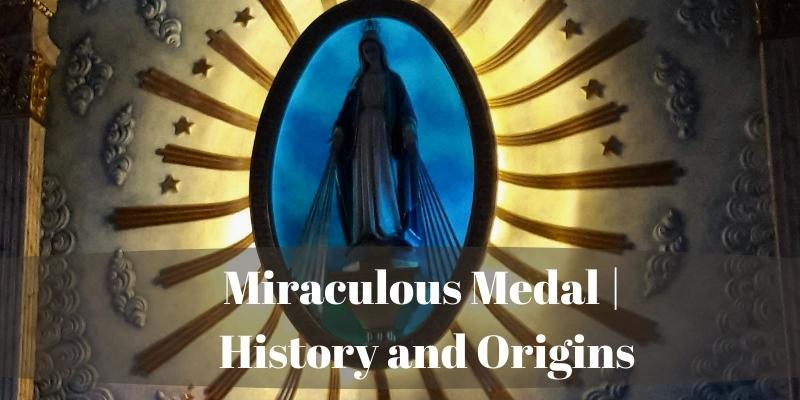 The Miraculous Medal, also known as the medal of the Madonna Delle Grazie or medal of the Immaculate Conception, is the name used in the Catholic tradition to refer to the medal made after an important event in 1830 in Paris. During this year, Saint Catherine Labouré. A novice in the convent of the daughters of charity of Saint Vincent de Paul will receive some Marian apparitions.

The medal was minted following the requests of the Madonna expressed during the second apparition, which took place on November 27, 1830. Even today, the medal represents a sign of love. And a pledge for the protection of the Virgin on the faithful who carry her with them.

The popes Gregory XVI and Pius IX used it assiduously, transforming it into an object of worship. From that moment until today, the ” Chapel of the Apparitions ” has become an almost pilgrimage place open to all the faithful. Let’s discover together the history and curiosities of the Miraculous Medal.

The story of the Marian apparitions begins in Paris in 1830, in Rue du Bac, which has now become an important city center. We are in the convent of the Daughters of Charity of San Vincenzo de Paoli. Santa Luisa de Marillac founded us. In this convent lived a nun, Catherine Labouré (1806-1876). It is an essential church as the Order founder was buried here: Luisa de Marillac. Furthermore, the heart of San Vincenzo de Paoli is also kept inside an urn.

The Miraculous Medal is considered the medal of the Madonna par excellence as it is the only one conceived and desired by the Virgin Mother herself. Sister Caterina recounts that on the eve of the feast of St. Vincent de Paul, on July 19, 1830, she went to bed with a strong desire to meet the Holy Virgin. This desire arose after receiving a lesson on devotion to the Saints and the Virgin Mary.

Representation of the Miraculous Medal Virgin Mary and the miraculous medal

Thus she remembers the joyful event: “At 11.30 in the night, I felt called by my name. I pull back the curtain, and I see a child dressed in white who says to me: “Get up quickly and come to the chapel that Our Lady is waiting for you!” I hastened to get dressed and walked beside the boy.

But Madonna was not there. After a short wait, the Madonna appears at the painting of San Giuseppe. She told me: “My daughter, the good Lord wants to entrust you with a mission for which you will have to suffer a lot. You will be contradicted, but fear not: you will have the necessary grace. You report what you will see with confidence and simplicity. Times are sad, disasters are about to fall upon France, and the whole world will be devastated by turmoil. Come to the foot of this altar: the graces will be scattered on the people who will ask for them confidently”.

Also, four months after this first meeting, on November 27, 1830, the Madonna returns to speak with the young nun. Catherine is in the large chapel for afternoon meditation with the other novices. She suddenly hears the usual rustle of clothes; she raises her eyes and sees the Virgin Mother on the altar. Turning to her, he said, “This globe represents the whole world and each soul in particular.

Novena of the Miraculous Medal: 27th of the month

The rays are the symbol of the graces that I grant to those who ask me ”. Then Catherine replied: “O Mary, conceived without sin, pray for us who have recourse to You!” Our Lady said, “Have a medal struck on this model; the people who wear it around their neck will receive great graces. The graces will be more abundant for those who will carry it confidently”.

In memory of the apparitions of Our Lady, the tradition of reciting the supplication to the medal of the Immaculate Conception on the 27th of each month, especially on November 27th, has remained unchanged. We remember that Catherine received the mandate to create the medal on this day. In addition, the novena of the Miraculous Medal should be recited at 5:30 pm precisely, the exact time when her apparition took place.

“ O Mary conceived without sin, pray for us who have recourse to you.

O Immaculate Virgin of the Miraculous Medal, who, moved with pity by our miseries, descended from heaven to show us how many parts you take in our pains and how much you use to divert from us the punishments of God and implore his graces for us, move to pity for the present. Our need; console our affliction and grant us the grace we ask of you. Hi Regina. O Mary conceived without sin, pray for us who have recourse to you!

O Immaculate Virgin of the Miraculous Medal, who, as a remedy for so many spiritual evils that afflict us, you brought us your Medal so that it could be the defense of souls, medicine of the bodies, and comfort of all the poor, here we gratefully hold it on our heart. We ask you for it to answer our prayer. Hi Regina. O Mary conceived without sin, pray for us who have recourse to you!

O Immaculate Virgin of the Miraculous Medal, you promised that great graces would be for the devotees of your Medal who had invoked you with the ejaculation you taught; Well, oh Mother, here we, full of trust in your word, turn to you and ask you, for your Immaculate Conception, the grace we need. Hi Regina. O Mary conceived without sin, she prays for us who have recourse to you. “

The prayers of the Medal

Each side of the coin is characterized by a particular prayer that highlights its value. Let us think, for example, of the ejaculation that, according to Sister Labouré. The Madonna wanted to be engraved on the medal rhythm. On the two essential times of Christian prayer: one is an invocation, and the other is praise. According to God’s plan, Mary puts herself in the foreground to defend the faithful.

The initial greeting is an “Ave, o Maria,” the same with which the archangel Gabriel introduces his announcement. These words are to be understood as a new level of intimacy and friendship of the Christian preparing to address his prayer to the Virgin. Another important aspect of worship is the hymn, an affirmation conceived without sin that confidently surrenders to God and risks existence on his word, in stark contrast to the figure of the Genesian woman.

The supplication is a gesture that overturns the perspective in the simple words “pray for us.” Prayer to Mary is done to receive it; unlike prayers, we usually turn to God. When we ask Mary to pray for us, we do it confidently because we associate all the work of the Trinity with her.

Symbol analysis: how to interpret the miraculous medal

The Miraculous Medal has an oval shape and is characterized by numerous symbols that make it a proper object of worship for the devout faithful. Let’s start with a simple analysis of the iconography of the back of the medal. Here are the main elements and their meaning:

Let’s now move on to the front of the coin. The symbols are:

But the Miraculous medal is described in three adjectives: miraculous, luminous, and painful. Miraculous because, a few months after the apparitions, Sister Catherine goes to the shelter of Enghien to care for the elderly. The nun begins her work, but she continues to hear a voice inside her urging her to have the medal struck. Indeed, after the spread of a strong epidemic in February 1832. Which caused numerous deaths, the distribution of the first medals made by Father Aladel, confessor of Sister Caterina, finally began. The number of healings increased, as did the conversions to Christianity.

Luminous because among the symbols of the medal, we find rays of light that symbolize the apparitions and justify our trust in Mary and the Creator. Therefore, painful because it reminds us of the crucifixion of Jesus and the bond between Christ and the Virgin Mother, who suffered for the sacrifice her Son had to make. Mary is associated with her son’s mission of the Salvation of humanity, and she participates, with her compassion, in the same act of the redemptive sacrifice of Jesus.

The Medal of the Madonna is a vital sacred instrument for the Christian faithful. On Amazon, you can find many models to always carry with you: visit the page dedicated to the Miraculous Medal!

Where is the Tree of Life located?