The number 12 in the Bible and its multiples are repeated many times in the Apocalypse of St. John and the Gospel. In the Apocalypse, St. John speaks of a multitude of one hundred and forty-four thousand marked from the tribes of the children of Israel. The tribes themselves are twelve. Twenty-four out of twenty-four stalls are the Elders, invariably described by St. John. The woman clothed with the sun has a crown of twelve stars on her head.

Number 12 in the Bible represents the Apostles, so much so that Matthias is called as soon as Judas dies to keep the same number. What is the meaning of the number twelve and its multiples in the Holy Scriptures and for Israel?
This number undoubtedly has great importance in the Bible.

The texts of the Holy Scriptures and also for Israel. The number 12 in the Bible contains a great symbolic value because it underlies its space-time origin. But it was probably derived from other cultures, such as the Babylonian one (for example, the number represented the universe in its internal complexity). The duodenary characterises the year and the zodiac; the number 12 in the Bible indicates the fullness of the year, consisting of 12 months). But also and above all because it represents the number of the election, that of the people of God.

Number 12 in the Bible

The 12 sons of Israel-Jacob are the eponymous ancestors of the 12 tribes of Israel (Gen 35,23. See Jacob’s blessing in chapter 49 of the book of Genesis). Reuben, Simeon, Levi, Judah, Issachar, Zebulon, Joseph, Benjamin, Dan, Naphtali, Gad, and Asher (cf. also Num 26-5-51). Furthermore, in the book of Numbers (7.10s.), we read that the offerings for the dedication to the altar were presented starting from the day it was anointed (consecrated). Every day that followed, up to the twelfth, an offer was made by a representative of each of the tribes of Israel.

The first book of the Chronicles (24,7-19) presents the priestly classes, which list 24 priests who must give their service. This number is explained about a lunar calendar; it will not be the same at other times. Multiples of twelve will not have much relevance as they do in the New Testament. Instead, the number seven (the week) with its multiples will pay more attention.

The number 12 in the Bible, and not its multiples, remains fundamental in an eschatological sense. Prospectively, Ezekiel imagines in the new Jerusalem a great wall with twelve gates (Ez 48,31-35). The exact number, therefore, of the tribes of Israel, now dispersed due to the exile and destruction of the temple at the hands of the Babylonians. Each gate will have the name of each of the tribes of Israel.

Representation of number 12 in the Bible 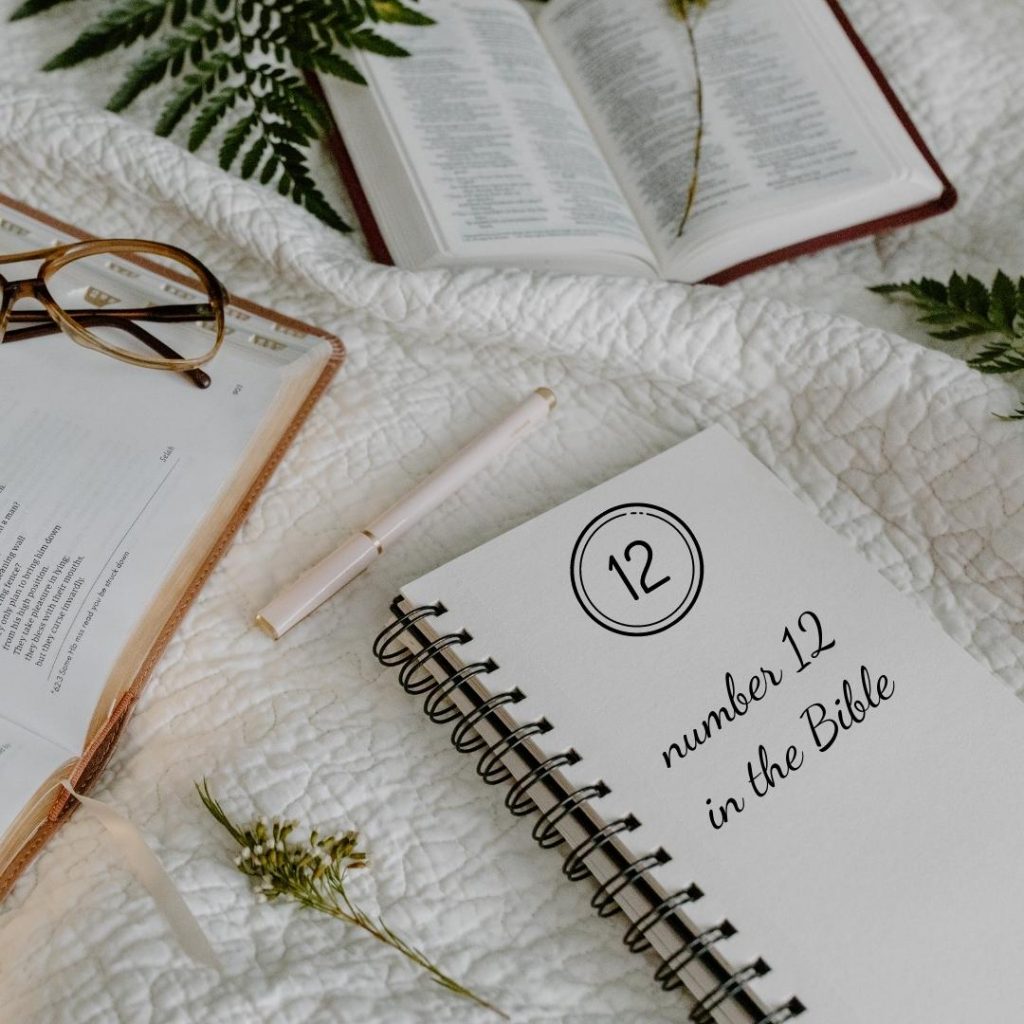 Number 12: The meaning in the New Testament

The New Testament writers continued the high regard of the Twelve. This is understandable for theological reasons: Jesus’ message was first addressed to the people of God. The fact that Jesus calls twelve disciples into his inner circle is symbolically loaded. The messages? Is: In Jesus, God continues what he started with his people Israel. The twelve disciples of Jesus take the place of the twelve tribes – all of them of the Jewish faith. After Jesus’ death, twelve apostles are to convert the twelve tribes of Israel. And at the end of time, in the Last Judgment, the “old” twelve will be held accountable by the “new” twelve ( Matthew 19:28 ).

Number 12: Stands out in the Bible

In general, the apocalypse: According to the seer John, an overpowering woman will appear during the events of the Last Judgment, “on her head a crown of twelve stars” ( Revelation 12,1 ). And after the end times turmoil, the heavenly Jerusalem comes into view. The place of hope for all believers, the new paradise in which there will be no more suffering and screaming, no tears, and no more pain.

The city wall has “twelve foundation stones and on them the twelve names of the twelve apostles of the Lamb.” Its length is 144 – twelve times twelve – cubits. “And the twelve gates were twelve pearls; each gate was of a single pearl” ( Revelation 21:14ff ). With so many twelve in the book of books, the question arises: what would the Bible be without the twelve?

The twelve are also present in theology and the history of faith. “It is the multiplier of two other central sacred numbers, namely three and four,” says theologian Christoph Markschies. The three he mentions are a “divine” number. The Christian image of God is based on three. The divine trinity consists of God the Father, Son, and Holy Spirit. Three characteristics that God carries within himself, three persons who mysteriously represent three characteristics of God.

This three is four times in the twelve. The four describe all cardinal points and, thus, the entire earth. Whoever takes the four three times symbolically connects heaven and earth, the divine and the human. “In antiquity, the number was also considered the order structure. With which God in Israel and the gods in Babylon as well as in Egypt ordered the world”. The church historian Christoph Markschies knows, “the number was, so to speak, the trace in which God, the gods, the divine were present in the world. The framework of order in the world consisted of numbers.”

The number 12 in the Bible represents a significant role in Judaism. The Greek heaven of gods is also permeated by the number twelve. Twelve Titans make up the College of Gods. It is amazingly similar to Norse mythology. The seat of the gods Asgard consists of twelve heavenly palaces in which Thor, Odin, and their companions live.

The number 12 was already particular before the religions entered the world plan. The number twelve predates cultures, perhaps even more so: it is a foundation of cultures. It became an element that united religions: everyone could do something with the twelve, the people in the ancient Orient. As well as those in the far north, the Jews, the Greek philosophers, and later Christians. Twelve stands as the original number for perfection above the idols created by humans.

The number twelve also played a significant role in them. For example, saying a spell twelve times or twelve demons appearing. In the philosophical movement of Gnosticism, there was the idea of ​​twelve thoughts that God thought before he created the world.”
God and the devil fight for power over the twelve

This is also an idea anchored in popular belief: God and the devil have recognised the importance of twelve as the number of perfection. And are fighting for power over twelve. In Jesus’ direct surroundings, the evil side succeeded in doing this for a short time: Judas, one of Jesus’ twelve disciples, turned out to be a traitor and Satan’s henchman. With that, the perfect twelve was destroyed. After the resurrection of Jesus, the first Christians quickly chose a replacement for the absent Judas: With the apostle Matthias, the number twelve was reached again. Traces of such legends can also be found in the Bible. An idol called “Bel,” “severe, for example wants to prove its power by demanding twelve sacks of wheat flour as a daily sacrifice (pieces from the book of Daniel 2 :1 ).

The knowledge of astronomers was also reflected in the Bible. Astronomers have divided the apparent orbit of the sun on earth into twelve signs of the zodiac. The system has fascinated people for five thousand years. Today it finds an echo in astrology, sometimes more, sometimes less severe. “severely signs of the zodiac each have a different vibration,” explains the Berlin astrologer Helga Biebers to those seeking advice, “they are a picture of the perfection of creation. God reveals himself through these twelve signs.”

Is that wisdom number mysticism? The long history of the Twelve urges caution in making hasty judgments. At all times, deep theological insights and frivolously naive folk beliefs were mixed, mystics and rationalists. Enthusiasts and the head-driven lived side by side. Scientific minds have always found nothing to gain from spiritualistic attempts to interpret the world. Least of all numerical speculation.

It is worth noting that while images of God and belief systems change. The numbers remain the same. This makes them something of a backbone of creation. Especially the twelve.

First, the biblical evidence is that the number 12 appears one hundred and sixty times in the books of the Bible. And in significant places. Right at the beginning of the Bible, in Genesis, for example. Progenitor Jacob, a grandson of Abraham, had twelve sons. Shortly before his death, he blessed each of them and declared them to be the germ cells of the people of God. “These are all the twelve tribes of Israel. And this is what their father said to them when he blessed them, each one with a special blessing ” ( Genesis 49:28 ).

After the twelve tribes are called, the number appears more and more frequently. For example, during Israel’s wandering in the desert: During their 40-year wandering in the desert, the people of Israel stopped at the oasis of Elim. The Israelites quenched their thirst there at twelve springs of water (Exodus 15:27 ). At the foot of Mount Sinai, Moses built an altar surrounded by twelve stone pillars, each with the name of a tribe carved on it ( Exodus 24:4 ).