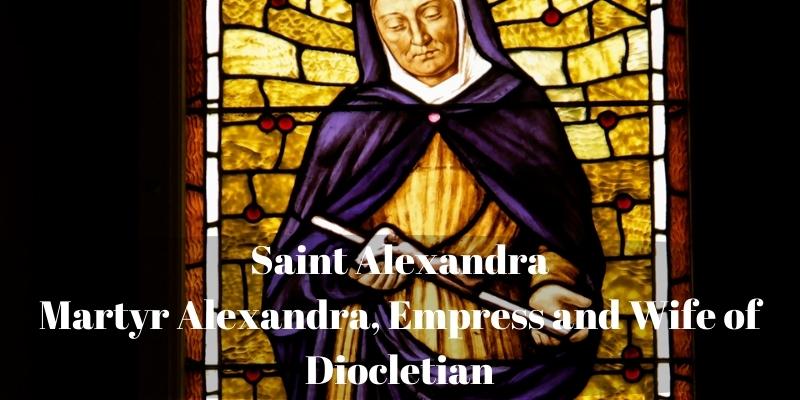 Saint Alexandra the Empress presented herself to the Emperor and revealed that she was a Christian. She did that when she realized that Saint George managed to stay alive and healthy, even though he was in prison and tormented in every way, precisely to hasten his death.

Alexandra, the martyr of Christ, was the wife of Emperor Diocletian. She ended up in prison after confessing to the emperor that she was a Christian. Saint Alexandra Empress is celebrated on the calendar on 21 April. Empress Alexandra sacrificed her life for the Christian faith at the beginning of the 4th century during the persecution of Christians. In addition, her three servants, Apolo, Itchy, and Codrat, sacrificed themselves after confessing their faith. The emperor decided to imprison Alexandra and later ordered that she and George be cut down. On learning of this decision, the imprisoned mentioned praying to God.

Apollos, Jaschie, and Codrat, the empress’s servants, saw how she prayed and especially how she despised the temporal kingdom and the emperor. Then they decided to revolt, rebuked the emperor, and called him a transgressor or savage because he did not pity his wife, the woman who had given him children.

Who is Saint Alexandra?

Apollos, Isachias, and Codrat being of the servants of Empress Alexandra, and seeing that she had despised the wicked and wicked kingdom and the hard-working emperor and that, believing in Christ, she also died for him, they also believed in Christ. So, boldly appearing, they rebuked the king, calling him a transgressor and a savage and saying he did not pity his wife, with whom he had borne children.

Alexandra, the servant of Christ the Lord, was the wife of Emperor Diocletian. So when she saw that St. George was tormented in many ways to die, that is a beautiful way he remained alive. She appeared before the emperor while offering sacrifices and confessed herself as a Christian, for which she was imprisoned. When she was imprisoned, it was decreed that the two, George and Alexandra, should be cut off. When she heard of the emperor’s decision, she prayed to God in prison and gave her soul.

Also, the emperor was angry at this and ordered them to be put in prison, and when he had done so, he thought all night about what death he would lose them tourer. In the morning, when he brought them out of the dungeon, he commanded Codrat to be cut down and Apollos and Isachias again to be imprisoned and starved to death. Yet, after a few days, also exhausted by hunger, they gave their souls into the hand of the Lord.

Biblical places from the times of Alexandra

What is Alexandra known for?

Therefore, in the year 0303 AD, watching the torments of the great Saint George, who remained alive and well, Saint Alexandra appeared before her husband Diocletian, offering sacrifice to idols and confessing herself to be a Christian.

Alexandra is known according to the martyrdom she suffered at her husband’s command. For this, she was put in prison, and later it was decreed that both George and Alexandra should be cut down. On learning of the emperor’s decision, while she was in prison, Saint Alexandra prayed to God and gave up her soul, resting in the rest that the Lover of Man, God, had prepared for her, before whom she constantly intercedes for all those who remember her with faith.

Finally, for Codrat, he commanded to be cut down, while Apollos and Jason were sent back to the dungeon to be left to starve. But, the two servants found themselves without food, and when hunger began to exhaust them, they decided to give their souls to God.

What did Saint Alexandra do to become a saint?

Therefore, the saints are the friends of God, those who do His will; as it is written, You are My friends if you do what I command you. Also, they are the ones about whom the Holy Spirit spoke through the King-Prophet David: Therefore blessed are those who are blameless in the way, who walk in the law of the Lord. So blessed are those who keep his commandments and seek him with all their heart.

To be declared a saint, Alexandra, Diocletian’s wife, was martyred. Saints also choose to follow God, be with God, and be in God with great determination. But where most people falter under the weight of their passions, they throw off the burdens of sin and press forward with strength. So, where most people stumble under the sweetness and tyranny of lust, the Saints turn their eyes to the love and beauty of the Godhead.

Saints as friends of God do not appear only from the last days before the Lord’s crucifixion. But, as we have also seen in the Old Testament Psalms, this reality has been revealed by the Holy Spirit.

“Saints are ordinary people who do what they do for the love of Jesus, say what they must say without fear, love their neighbor even when he curses them, and live without regret over yesterday or fear of tomorrow.” Was Alexandra the wife of Diocletian?

The Great Saint George the Great put his faith in Jesus Christ above his life. Saint George lived in the time of Emperor Diocletian and did not let himself be defeated even when the Emperor ordered him to be subjected to severe torture to make him renounce his Christian faith.

From relevant historical sources, it is known that Emperor Diocletian’s wife was Alexandra the martyr. Although Diocletian was an excellent emperor and succeeded in halting the period of severe decline of the Roman Empire, restoring the economy, and restoring order and good order, due to the Great Persecution against Christians, his image was demonized by the Christian emperors who came to power, and his good deeds, as well as the restitution of the Empire, overlooked.

So Emperor Diocletian introduced the Tetrarchy, a system of government and administration of the Empire. Yet, Maximian thus became Caesar, unlike Diocletian, who was Augustus.

When she saw that Saint George was tormented in many ways to die but that he remained alive and well in a marvelous way, she appeared to the emperor while offering sacrifice to idols and confessed herself as Apra Christian before the emperor.

Because she declared her faith in Christ, Alexandra suffered martyrdom. For this reason, she was even put in prison, after which the decree was passed that George and Alexandra should be cut down, and when she found herself in prison, she prayed to God and gave her soul. She had despised the wicked and wicked kingdom and the mortal king, and, believing in Christ, she had also died for him, also believed in Christ.

Therefore, boldly appearing, they rebuked the king, calling him a transgressor and a savage and saying he did not pity his wife, with whom he had borne children. But the emperor was angry at thisApr and commanded that they should be imprisoned. When he had done so, he thought all night what death he would lose them, and in the morning, when he had brought them out of prison, he commanded that he should be cut down for Codrat; and Apollos and Isachias again should also be put in jail, and starved to death. After a few days of being exhausted with hunger, they gave their souls to the Lord.

“The mysteries of salvation and God were given to you by the Heavenly King Christ our God, the holy and glorified wise martyr Alexandra, and seeing the miracles of the great martyr George, who confessed the Lord with His wisdom, you feared neither rebuke nor the wrath of Diocletian and confessed Christ God: “God of George, help me, as You are the Almighty.” For this reason, praising your high love, wisdom, and glorious and courageous confession of the Truth, Who is our Lord Jesus Christ, we call you:

So rejoice, for you have received the Truth of Christ with all your heart;

Be also glad, for you have sealed your salvation by confessing Him to all;

Therefore, rejoice, for yet you have overcome the folly of idolatry in the sight of men;

Be also glad for you have received the heavenly crown;

Alexandra, the maleness of Christ God, was also the wife of the emperor Diocletian; so when she saw that Saint George was tormented in many ways to die, but that is a beautiful way he remained alive, and well, she appeared to the emperor, while he was offering sacrifice to idols, and confessed herself a Christian before the emperor, which was her husband.

If you enjoyed our article, please visit the following Quiz to test your biblical knowledge about the unknown mystery of Saint Alexandra and the other saints. Also, I wanted to thank you for your time, and if you have any questions, please get in touch with us at office@doortoeden.com.