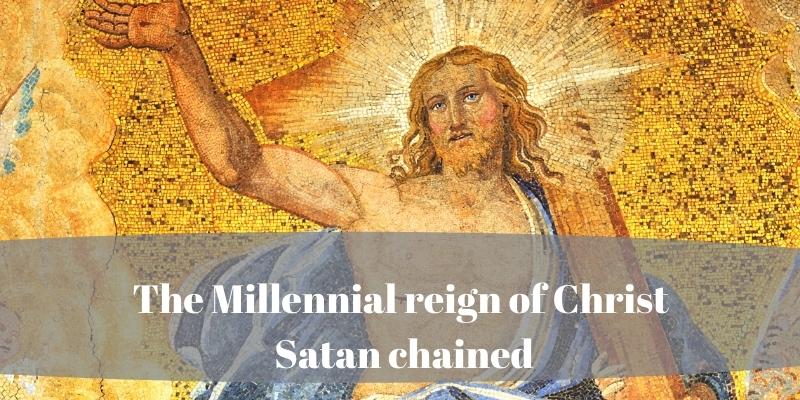 Some claim that between the Second Coming and the end of the world. Christ will establish a kingdom on earth. He and His chosen ones will reign for a thousand years, called the millennial reign of Christ.

The millennial reign of Christ is when Jesus limited the devil’s power over men. The members of this thousand-year kingdom are only those who have not bowed to the beast. And its mark resurrected at the first resurrection. And those who have not received this resurrection will not be resurrected. Until the end of those thousands of years, that is, at the second resurrection. For this resurrection, about the first, is the second. At the end of this time, the devil will be left again, for some time, to act upon men. Over them, the second death has no power. At the end of Christ’s millennium and after a period of evil action. On the saints, the devil, together with his own. Will be cast into the fires of hell, the second and eternal death, with no possibility of returning.

The 1000-year kingdom makes up the Church or Body of Christ, the head of which is Christ Himself. And inflation and entrance into this kingdom are only through the baptism of the new birth. No one can enter this kingdom except by baptism, that is, by being born from above or of water and the Spirit.

What is the millennial reign of Christ in the Bible?

In Revelation, we know that John said that he saw some thrones. And also, judgment was given to those who sat on them. And I saw the souls of those who had their heads cut off because of the testimony of Jesus and the word of God and those who did not worship the beast and his icon and receive his mark on their foreheads and hands. They have risen and reigned with Christ for a thousand years. The other dead did not rise until the thousand years were over. The second death has no power over them, but they will be priests of God and Christ and reign with him for a thousand years.

The millennial reign of Christ in the Bible is the thousand-year reign of Christ during Revelation. It will not begin until the Second Coming and will be preceded by the resurrection of the righteous who will reign with Christ. It will last a thousand years, after which the resurrection of sinners, the judgment, and the end of the world will come.

When the thousand years are completed, Satan will be loosed and come out of his dungeon to deceive the nations in the earth’s four corners, Gog and Magog, to gather them together to war. And the devil, who deceived them, was cast into the lake of fire and brimstone, where the beast and the lying prophet are. And they will be worked day and night forever and ever.

How long will Jesus reign on earth?

An angel descended from heaven and held the key to the abyss and, in the other, a great chain. The angel took hold of the dragon and the ancient serpent, the devil and Satan, and bound him for 1000 years. He then let him out into the abyss, shut him up, and put the seal there. So that he would only bring more people astray once the 1000 years were up. And Christ will reign when Satan is cast into the abyss of the earth. After his imprisonment, he will have to be loosed for a short time.

There will be Thrones of Kingship, and on them will sit the souls of those whose heads were cut off with axes because they were martyrs for Christ and given the right to judge. At the same time, they suffered torment and pain on earth, did not conform to the image of the beast, and did not receive his mark or seal on their foreheads or hands. Yesterday they rose to life and reigned for 1000 years with Jesus Christ. The other dead remained in rest until the 1000 years were completed. This was the first resurrection.

Having turned away from the face of God and thus became the prince of darkness. Satan has sought to multiply his followers, tempting the firstborn to disobedience. In this way, he increased his dominion. Since ancient times, the Church of Christ has believed that pride is one of the most important. Spirits have been the cause of evil in both the spiritual and material world. The eternal salvation of humanity is closely linked to the overthrow of Satan and the ruin of sin in the world. The devil who led them all astray was cast into a pool of fire. And brimstone where the beast and the lying prophet are. And they will all be tormented day and night forever and ever.

Satan, the deceiver, will have the right given to him by God to rule precisely as he wishes, but not for a long time. Satan will be allowed to reign to deceive people, test them from the world’s four corners, and gather them all to war.

After 1000 years, Satan will be released from prison and will come out of there. To lead the Gentiles astray from all four corners of the world on Gog and Magog. To gather them to a war whose number is greater than the sea’s sand and the ocean’s depth. And they shall go up upon the expanse of the earth and besiege the camp of the saints and the beloved city. And God has brought down fire and burned them all to ashes.

Key Verse related to the millennial reign of Christ

Then I saw an angel descending from heaven, holding the key to the bottomless pit. With a large chain in his hand. He captured the dragon, that ancient serpent, also known as the Devil and Satan, and bound him for a thousand years. He threw him into the bottomless pit, closed it, and sealed it over him to keep him from deceiving the nations until the end of the thousand years. After that, he must be released for a time. Will Satan be chained?

The length of Christ’s reign will be short, and it will be one sign that foreshadows the approach of Christ’s second and final coming. This duration is nothing other than the time between the first and second coming. Of the Lord, or, more precisely. The time from the establishment of the Kingdom of God until the second coming. So it is about the Kingdom of God and its duration in the world. During this time, there will also be a battle between Jesus with Satan.

The devil will be defeated and bound by Jesus during this millennial reign of Christ. Therefore Satan will be chained, taking power over men.

Therefore Christ entered his house and bound him, limiting his power over redeemed humanity. To enter the millennial reign of Christ is conditional upon the resurrection, called the first. Which can be nothing other than Christian baptism, often even called resurrection. And at the end of this kingdom, the devil will again be loosed to deceive the people and work in power and fury against the saints in the form of the anti-Christ, the beast, or the false prophet.

What are the three main views of the millennium?

Three main views of the millennium are the following:

The amillennialists offer sermons and teachings to emphasize that there will be no reign of Christ because they believe that we are already living in the last days. When we have already been living in the millennium for thousands of years because the dead came out of their graves the moment Jesus breathed His last breath.

Postmillennialism offers interpretations of Revelation chapter 20 and supports the idea of Christ’s second Lordship and coming.

The premillennialists interpret that Jesus will return to earth before the appearance of the thousand years, that is, the millennium of Christ’s reign.

The angel is also present in Revelation 9 to release him from bondage and continue to amaze him for a little while. So that later, we can arrive and enjoy what will happen at the Last Judgement—knowing that we have reigned over the earth with Jesus and participate in the new world and the new Jerusalem.