Angel Gabriel means: God is my strength. He is the angel of the Good News, of resurrection. Of compassion and divine revelation. God created the angelic world out of nothing, not out of anything pre-existent or out of His being.

Because angels are non-human, they cannot speak of the transplantation of the species. As a result, they do not marry, do not multiply, and do not die. The angels transmit to each other their thoughts and decisions without uttering words. However, to fulfill their job, they can take on human form.


What is Gabriel’s role in the Bible?

He announces to the Holy Fathers Joachim and Anna the birth of the Mother of God; he reveals to Zechariah the birth of the Incarnation. So he shows the shepherds that a child has been born to them, Joseph, Mary’s fiancé. Therefore strengthens him so that they will not doubt anything. Guides the Holy Family to Egypt and brings the myrrh-bearing women the news of the Lord’s Resurrection.

The role of the angel Gabriel in the Bible is as God’s messenger and Archangel who supports women who want to become pregnant or have children.

Archangel Gabriel is depicted in iconography, holding a white lily flower as a symbol of joy and blessing. Archangel Gabriel is the angel of goodness, greatness, power, and mercy. In Hebrew, Gabriel also means “man-God.” His name contains the concentrated news that God will become man and assume human nature.

What is Gabriel’s purpose as an angel?

Gabriel’s role as an angel is to be the messenger of the good news of the Highest God. Saint Archangel Gabriel is the Archangel of good tidings.

He was chosen and sent by God to the Virgin of Nazareth to proclaim to her the great mystery of the Lord’s coming. Gabriel brought the news of the Annunciation to Joachim and Anna. He gave his name to Saint John the Baptist. Also, he proclaimed the birth of Christ to the shepherds and was the first to sing: Glory to God in the highest and on earth peace and goodwill among men.

In the sixth month of Elizabeth’s pregnancy, God sent the angel Gabriel to Nazareth, a town in Galilee, to a virgin who pledged to be married to a man named Joseph, a descendant of David. The virgin’s name was Mary. 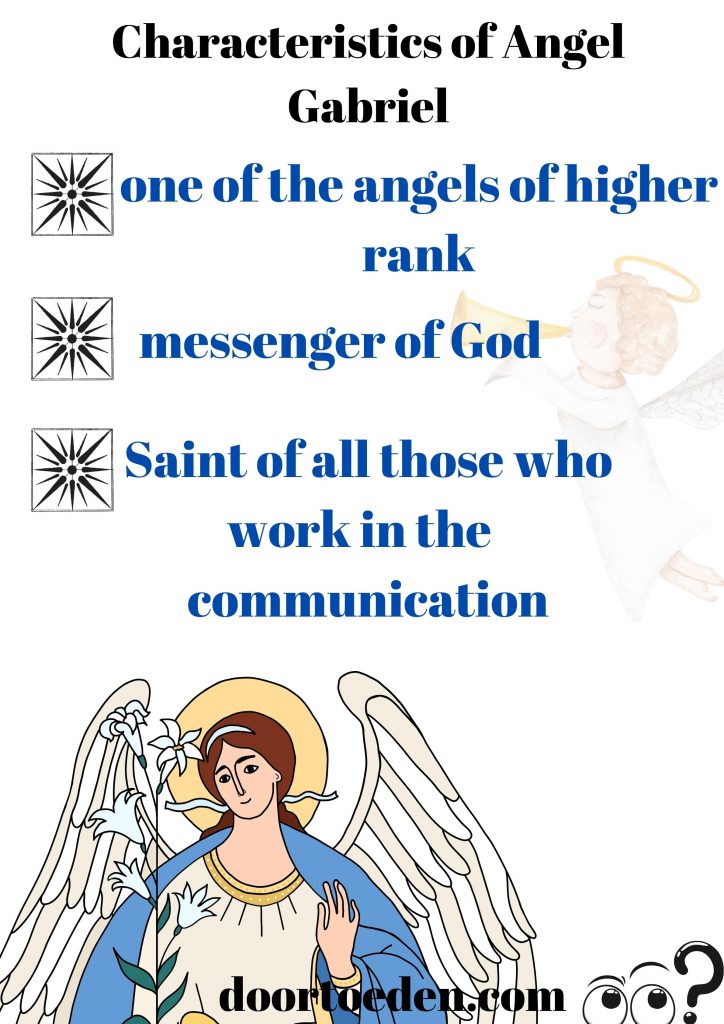 What does the angel Gabriel represent?

Archangel Gabriel is celebrated on March 26, the day after the Annunciation, on November 8. When all the miracles performed by Saint Archangel Gabriel are remembered. The feast dates back up to the 9th century. Therefore, the angel Gabriel’s mission as messenger probably inspired his presence in apocryphal and Merkaba literature, where he appears in stories about the creation of Adam. Also, the punishment of fallen angels and the funerals of Adam, Abel, and Abram.

Gabriel represents the embodiment of God’s good news. According to the Bible, he is God’s most precious herald.

He reassured Joseph when he wanted to leave the Virgin Mary. Saint Archangel Gabriel revealed the mystery of the Incarnation to the Magi, and he commanded him to flee to Egypt with the Child and return to Nazareth. In the Old Testament, Gabriel is one of Daniel’s frequent visitors, bringing him prophetic visions of the apocalypse.

What is Archangel Gabriel the patron saint of?

The angel Gabriel was sent from Heaven with messages of grace and good news for men. He is a faithful servant of God: he announces the birth of John the Baptist. Gabriel also brings Mary essential information about the birth of the Lord Jesus Christ; he is an angel with human characteristics. He taught Moses in the wilderness the writing of books. He was telling him the beginning of the making of the world, the first man, the life of that man, and of those who were after him AND the creation of Adam.

The Archangel Gabriel is the patron saint of those working in communications and the saint patron of gifts, prophecy, and the missions you have to accomplish on Earth.

The benefactor of our salvation, the great servant of God, the envoy who brings joy to the Blessed Virgin Mary, the Archangel Gabriel, is to be reminded daily. It taught Moses to write about the nations before, the flood, and the separation of the countries.

What did the angel Gabriel say to Mary?

The Annunciation is the first confirmed feast of the feasts of the Virgin Mary. The date of this feast varied in the beginning. Annunciation is celebrated yearly during Lent, one of the feasts for which the Church grants a ban on fish, regardless of the day it falls. So on this feast, Gabriel was sent by God to give Mary the Good News of salvation that the world’s salvation would lie in her womb.

Bible records prove that the Archangel Gabriel said to Mary: Mary, do not be afraid, for the Holy Spirit will descend upon you, and the power of the Highest will fill you!

The angel’s word is not the proclamation of an accomplished fact. He only informed the Virgin and awaited her faith and invocation. The Mother of God is astonished at the words spoken by the angel. Because what was to happen to her was beyond the law of nature. That is why she asks: How will this be since I do not know a man? But after the angel had told her the manner of the lavish wedding. The Virgin graciously said: Behold the handmaid of the Lord, be it unto me according to thy word.

Who are the three angels of God?

Psalm 34 claims that the Angels of the Lord encamp around those who fear Him and deliver them from danger. Scripture shows God’s intervention in people’s lives brought to fruition through His angels. They are not far from us. Like all creation, God created angels out of nothing, not out of anything pre-existent. Nor out of God’s being. The Church teaches that, first of all, God created all the heavenly powers out of nothing. By His Judah thought alone, to glorify Him in song and to serve Him, and then to serve men in this world as well, guiding them towards the Kingdom of God.

As non-human spiritual beings, angels are outside the ordinary conditions and experiences by which we know the existence of beings and things. And angelophanies, besides being rare, can easily be confused with theophanies and, subject to various interpretations, do not provide sufficient grounds for their existence.

Therefore, the angel Gabriel is God’s servant; he fulfills God’s commands. Also, he is a mighty angel, one of the most potent angels. He also defends the servants of God from the evil ones; he fights for the souls of men. About Gabriel in the Bible is very little written, and detailed information is hard to find.

What did Solomon do? Was Solomon wise?