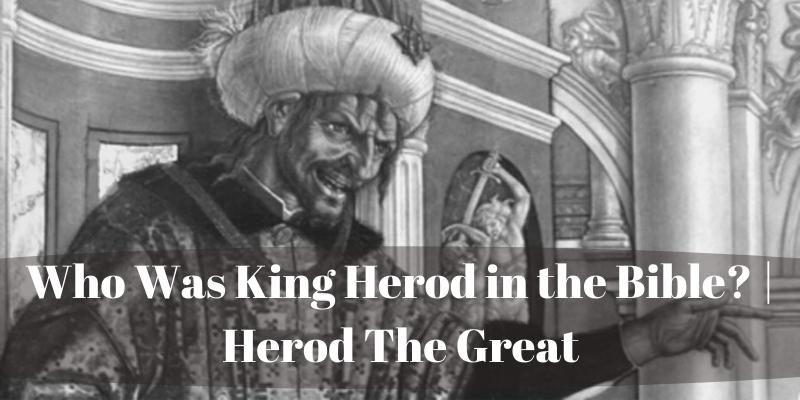 The Magi episode involves King Herod in the Bible. We find a sovereign with this name in the context of the birth of Jesus and, in the end, during the passion. Pilate, “knowing that Jesus was a Galilean and that he belonged to the jurisdiction of Herod, sent him to Herod. Who in those days was also in Jerusalem” (Lk. 23, 7). It was this second who had John the Baptist beheaded.

However, these are two different ‘Herods,’ as the one of the birth and the Magi died when Jesus was still a child (Mt., 2, 19-20). This Herod, called ‘The Great, was the father of the one of passion, Herod Antipas (4 BC-9 AD). Whom he had received from the Samaritan woman Maltase. The news is reported to us, especially by the historian Josephus in the two works: The Jewish War and The Jewish Antiquities.

His father was called Antipater, a Jew from Idumea (the region south of Galilee), and his mother Kypros, of Arab origin.
Antipater reached a very influential position in Judea after the Roman conquest (63 BC). And in 47 BC, he was appointed procurator by Julius Caesar.

Read also: The three magi story. Who are the wise men from the Bible?

When was Herod the Great born?

Herod the Great was born around 73 BC to an Idumean father, Antipater, and an Arab mother, Cyprus, originally from Petra, the capital of the Nabataeans. Idumea, a region between the kingdom of Judah and the Negev desert, had been conquered by the Jews. And its inhabitants forcibly converted to Judaism at the time of the Hasmonean king John Ircano (135-104 BC), about fifty years Before.

From 37 BC King Herod the Great reigned over Judea for 33 years. Ruthless and ambitious, he was a great king but was hated by his subjects and used by Rome. Josephus, the commander of the rebel troops in Galilee and future historian, could not help but think about it. Now that he was trapped in a cistern of the fortress of Masada (Israel), surrounded by the Romans.

After all, if he, his companions, and in general, all his compatriots were in that dire situation, it was the fault of King Herod the Great. He had been dead for more than half a century. But he remained the symbol of the Roman occupation of Judea. The one who had opened the gates of the kingdom to the empire. He ruled between 37 and 4 BC as a vassal of Rome. He was a skilled strategist and killer of children and relatives, a great builder and evangelical massacre of children. Herod was an enlightened king and ruler with an iron fist. Capable of exceptional feats and unprecedented violence, he is an almost impossible character to the frame. If you are interested in learning more about the massacres that Herod, the ruler, committed, we have attached a book below that you may find helpful. King Herod: A Persecuted Persecutor: A Case Study in Psychohistory and Psychobiography. I’d like you to see it on Amazon.

The story of the rise of Herod’s family in Judea is, first of all, the progress of Rome’s conquest of the region. To understand the reasons that pushed Julius Caesar in -47 to appoint Antipater, Herod’s father, as procurator of Judea. Then in -40, Marc Antoine and Octavian chose Herod as king of Judea; we must go back more than 20 years. At this time, the destinies of Jerusalem suddenly depended on the covetousness and injunctions of Rome.

Thanks to the internal struggles that shook Rome and its Empire, between Pompey and Caesar. Then Antony and Octavian Augustus, the Antipater family, and its vast eastern network quickly proved to be indispensable auxiliaries to the Roman suitors. For the stability of the region. Antipater’s family came from Idumea, an area south of Judea, which had just emerged from paganism to be Judaized by the Hasmoneans. Antipater had married Cypros, an Arab princess from the neighboring Nabataean kingdom. King Herod was, therefore, strongly linked to the royal family of Petra. Petra was at that time powerfully rich since she controlled the caravan trade coming from the mythical lands of the south.

Who was King Herod in the Bible?

At the time of Jesus’ birth, Herod the Great is at the end of his reign over Judea. King Herod, in the Bible, obtained this title from the Roman Empire thanks to his many bribes and the coups carried out by his army. Although Herod displayed himself as a performer of Judaic rituals, King Herod in the Bible was considered half-Jew because he was the son of an Idumean. (The Edom of the Old Testament) an enemy people of Israel.

Flavius ​​Josephus insists on the precariousness of his reign. At the beginning of King Herod’s reign, he had to impose himself on three fronts continuously. Inside, it was with the last members of the numerous Hasmonean family of royal stock who never accepted its legitimacy. The later Hasmoneans no longer played a political role but contested that of Herod. The Idumean origin of the new king, of recent Jewish stock, is a significant aspect of the quest for identity that he pursued throughout his life. Abroad it was with the expansionist designs of Cleopatra and Mark Antony. And the intermittent involvement of Nabataean royalty in internal Judean affairs.

Finally, King Herod in the Bible had to ensure the benevolence of the rulers of Rome by buying his place as king in hard cash. These, according to the account of Flavius ​​Josephus, seemed to do much to win the esteem of Mark Antony for him. There were undoubtedly common strategic interests and a shared history between Antipater and Julius Caesar. But money, and therefore the regime’s stability, had all the virtues combined to ensure Roman support. 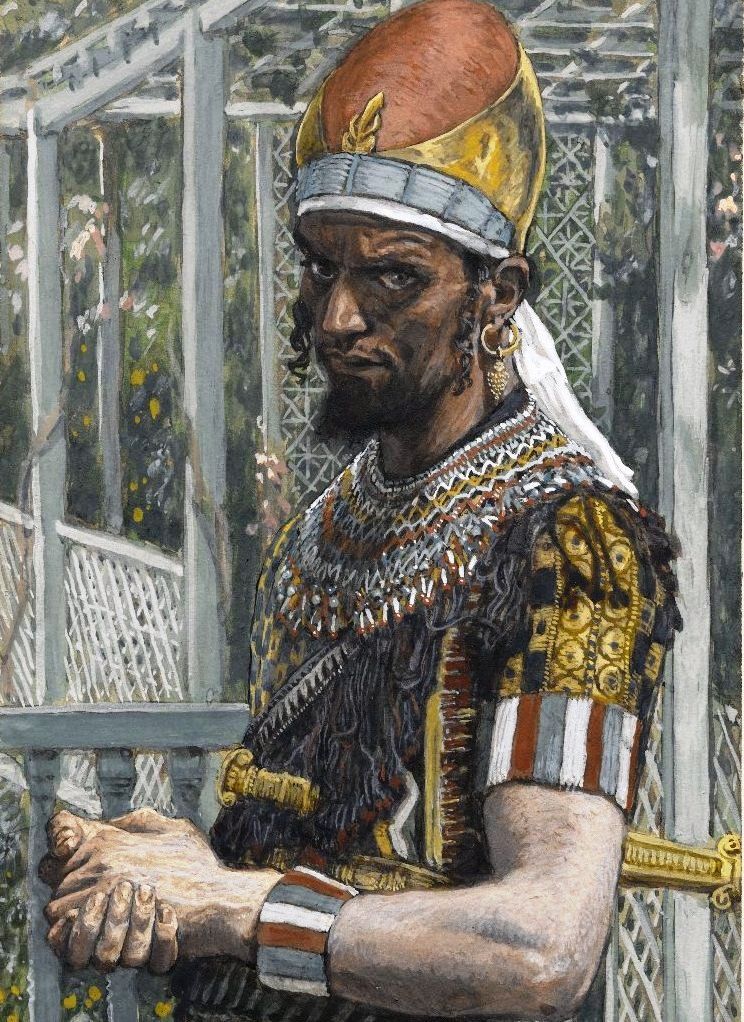 Representation of King Herod in the Bible

The end of King Herod’s reign in the Bible

The end of King Herod’s reign in the Bible was made chaotic by the struggle between all the claimants to the throne. Herod even had several wills made. On his death in – 4, he left power to Archelaus, Herod Antipas, and Philip, three of his grandchildren. But Octavian Augustus could break the last wishes of the deceased king. Only recognized Archelaus as an ethnarch and Herod Antipas and Philip as tetrarchs. The story of Rome’s dismantling of the kingdom was beginning. King Herod, in the Bible, did not know how to prepare for his succession.

Herod, however, left a well-administered kingdom forged by an iron fist. It was a police state that, while pursuing the purges of certain hostile circles, knew how to bring taxes into the coffers of the Treasury. King Herod, in the Bible, knew how to seize the property of all his enemies, increasing his fortune disproportionately. And was thus able to buy his place as king several times over in Rome. The kingdom could also be remodeled architecturally by the foundation of new towns and the construction of typically Greco-Roman buildings. King Herod, in the Bible, left his mark on the landscape of the whole region and beyond with an evergetic policy that took him as far as Greece.

Read also: Nativity Scenes Around the World: The Symbol of The Catholics.

King Herod died after a long illness in late March or early April 4 BC. Herod’s death freed the Jews’ hunger for independence. But the weakness of his successors favored the Romans’ thirst for power and wealth, which was previously curbed. Judea became a Roman province in 6 AD: to the bad government of the prefects and the growing aversion of the Jews to the increasingly corrupt lay. And priestly aristocracy and the pagan customs that the rulers tried to import tightened the relations between the Roman contingents and the population.

The discontent resulted in the revolt of 66 AD, unleashed by the most extremist factions (the Zealots). Who wanted political independence. It was the beginning of the First Jewish War. The then emperor Nero entrusted the general Vespasian with three legions, auxiliary troops, and the order to reconquer the regions in revolt.

On the other side, the future historian Josephus (pictured top left) was in charge of the defensive operations in Galilee. In 69, acclaimed emperor Vespasian left his son Titus the order to close the accounts with Jerusalem permanently. At the end of the summer of 70, despite the fierce Jewish resistance, Titus took the city, slaughtered the population, and burned the Temple: 97 thousand Jews were enslaved and dispersed throughout the empire. It was the beginning of the diaspora.

The era of Herod the Great (37-4) is the era of excellent construction in Palestine. Herodium was to serve as a refuge in case of escape and is located 5 km south of Bethlehem. According to Flavius ​​Josephus (The Jewish War I, 673), this fortress shelters the tomb of Herod. Herodium is dug into the cliff on a hill by two hundred marble steps. The circular enclosure has three half-towers (north, south, and west) and a circular tower to the east. The interior includes a bath and synagogue, the oldest preserved in Palestine.

On top of the arid rock, Herod built a palace, unique in its perfection. Three paths do the ascent of the rock. At the culmination of each, identical doors give access to the enclosure, which doubles as a natural square formed by the escarpment of the stone. The buildings are mostly grouped in the northern part of the land. The main palace is also located; the western part housed the administrative services and the residences of the court staff.

The North Palace, built on three levels, overlooks the abyss on the slope of the rock. The luxurious installation comprises, on the first level, a courtyard surrounded by Corinthian columns and walls decorated with frescoes, with an adjoining bath heated under the floor. This building is surrounded by administrative services and an impressive network of stores. A little apart is the synagogue, remodeled during the occupation of the fortress by the Zealots, whose last refuge was from 66 until 72 when the Romans stormed Masada.

Read also: Ephraim in the Bible. Tribe of Ephraim

Several groups are revolting against King Herod, but his cruelty and political genius allow him to assert his power. A vivid image of this is the fate of his own family: King Herod in the Bible is not afraid to murder those close to him if need be. Thus, he kills almost all his relatives, his wife, Mariamme, and three of his eldest sons.

On his deathbed, King Herod ordered the murder of many prominent Jews. To ensure that as many of his subjects as possible would mourn on the day of his death. Fortunately, this last wish was not fulfilled.